Divorcing and Difficult Conversations – Where to Begin

Getting separated or divorced often requires having many difficult conversations.  Sometimes it is hard to know where to start.  If you are in the process of divorcing or are considering separation, read on.

Amy Sereday, in an article on Mediate.com, observes that difficult conversation are seldom about just one thing, and that rooting out the hidden topics and having smaller, more manageable discussions about them is essential. For example, she says, a conversation about living arrangements for an aging parent may actually be five conversations: safety, finances, meal preparation, transportation and health needs.

Family and societal taboos make certain topics difficult; so does emotional resistance. Who is comfortable talking about an aging parent’s needs for new arrangements, or financial conflicts in marriage and divorce, a colleague’s objectionable behavior in the workplace, or racial or socioeconomic tensions? Practices in fields related to mediation, such as restorative justice, use conflict to build communities. This is the principle behind most approaches to difficult conversations. As the Harvard PON authors say, “people who are willing to ‘stick through the hard parts’ emerge with a stronger sense of trust in each other and the relationship, because now they have a track record of having worked through something hard and seen that the relationship survived.”

The experience of “working through” is value added in many mediations and collaborative law cases. It is also at the heart of conversations we face in conflicts outside a legal or other formal dispute resolution setting. The trick is, having the difficult conversation when we would dearly love to avoid it.  Neutral third parties like mediators can be a huge help here, and many of them are specially trained in particular areas, such as family or workplace conflict.

For those wishing to delve into some of the sources mentioned above, Google “difficult conversations.” 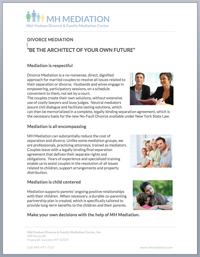 DIVORCE 101 WEBINAR:  What are the differences between mediation, collaboration and litigation?  Open to the Public. Free of charge. March 18, 2021 and Third Thursday each month thereafter at 4:00 pm. Call or email us to reserve a spot.RSVP Today
+